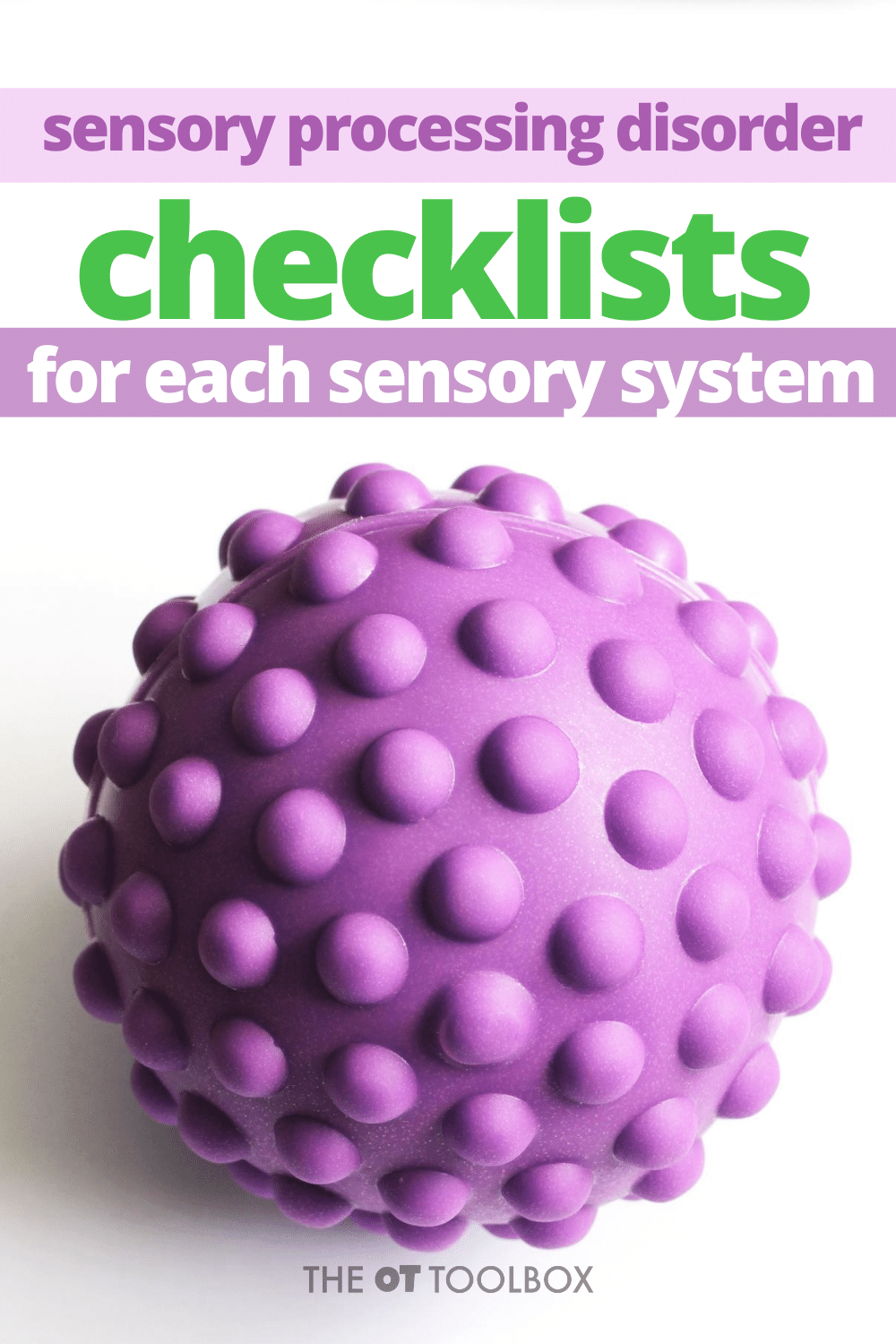 With sensory processing disorder, input from each of the sensory systems can be interpreted by the brain in different ways. Kids can hyper-respond or overreact to sensory input. Or, they can hypo-respond, or under-react to sensory information.

Sensory processing disorder can be seen in children or on adults.

Putting it all together – Let’s look at all of the sensory systems in a list:

Typically, dysfunction within these three systems present in many different ways.  A child with sensory difficulties may be over- or under-responsive to sensory input.  They may operate on an unusually high or unusually low level of activity.  They may fatigue easily during activity or may constantly be in motion.  Children may fluctuate between responsiveness, activity levels, and energy levels.

The Proprioception Sensory System is the recognition and response to the body’s position in space with an internal feedback system using the position in space of the joints, tendons, and muscles.  This sensory system allows the body to automatically react to changes in force and pressure given body movements and object manipulation.  The body receives more feedback from active muscles rather than passive muscle use.  Related to the proprioception system is praxis or motor planning.  Individuals are able to plan and execute motor tasks given feedback from the proprioceptive system. Praxis allows us to utilize sensory input from the senses and to coordinate hat information to move appropriately.

The Vestibular Sensory System is the sense of movement and balance, and uses the receptors in the inner ear and allows the body to orient to position in space.  The vestibular system is closely related to eye movements and coordination.  Vestibular sensory input is a powerful tool in helping children with sensory needs.  Adding a few vestibular activities to the day allows for long-lasting effects.  Every individual requires vestibular sensory input in natural development.  In fact, as infants we are exposed to vestibular input that promotes a natural and healthy development and integration of all systems.

Problems with the Vestibular Processing System can present as different ways:

Eighty percent of the information we receive from our environment is visual.  When perception of this information is not processed correctly, it can create an altered state that influences many areas:  eye-hand coordination, postural reflexes, and vestibular processing are all influenced and reliant upon the visual system.

The visual system is the sensory system that most individuals rely upon most heavily for daily tasks.  Visual information is perceived by cells in the back of the eye.  These cells (rods and cones) relay and transfer light information into information that is transferred to the central nervous system.  These photoreceptors are able to perceive day time vision and night time vision, with adjustments to sensitivity of light intensity.  They are able to respond to different spectrum of color and differentiate color information.  The rod and cone cells, along with the retina, process a great deal of visual information in the neural structure of the eye before transmitting information to the central nervous system.

The relay of information from the eyes to the central nervous system are made up of three pathways.  Pathways project to different areas of the brain and allow for a) processing and recognition of faces/shapes/motion (the “what” and “where” of objects), b) integration of information in order to coordinate posture and eye movements, and c) oculomotor adaptation.

Receptors for the auditory system are located in the inner ear and are responsible for receiving vibration from sound waves and changing them to fluid movement energy.  Information is projected to the central nervous system and transmits sound frequency as well as timing and intensity of sound input.  The auditory system is integrated with somatosensory input in order to play a role in controlling orientation of the eyes, head, and body to sound.

While many children with sensory needs have a tendency to chew on their shirt collars or pencils as a sensory strategy in order to seek proprioception needs, the behavior may occur as a result or as a reaction to under-responding to oral input.  Other children may seek out intense taste sensations and in that case put non-edible items into their mouth to satisfy that sensory need.  Still other children may over-respond or under-respond to certain flavors or taste sensations.  For those children, it is common to experience food refusal related to texture or taste.

Hypersensitivity to oral sensory input may present in a child as over-responsiveness or overreaction to gustatory sensation. This looks like:

The olfactory system, or the system that enables the sense of smell, has receptors in the tissue of the nose that are connected by pathways to the brain.  Connections occur via two pathways, one being a direct route to neurons in the brains and the second being a path that passes near the roof of the mouth.  This channel is connected to the taste of foods.

There is some evidence indicating that the sense of smell is more associated with memory than the sense of vision or the other senses.  The connection of the olfactory sense to the emotional part of the brain and previous experiences, as well as hypersensitivity or hyposensitivity to smells can cause anxiety or sensory related breakdowns in children with sensory processing difficulties.

The interoceptive sensory system is an area that most people are not as familiar with.  This system is connected to amygdala, the emotional system, the limbic system, our emotional awareness, our feelings, and subconscious arousal.  Receptors for the interoceptive system are in our organs and skin.  The receptors relay information regarding feelings such as hunger, thirst, heart rate, and digestion to the brain.  This is the foundation to sensations such as mood, emotions, aggression, excitement, and fear and in turn, promotes the physical response of our bodies.

There is a lot to think about here, right? Taking a giant list of common sensory processing disorder lists and knowing what to do with that list is complicated. What if you had strategies to address each sensory system’s over-responsiveness or under-responsiveness so you could come up with a sensory diet that helps kids function?

In The Sensory Lifestyle Handbook, I do just that.

Sensory processing is broken down by sensory system so you can understand what you are seeing in the sensory responses listed above. Then, you can use the lists of sensory activities to help the child complete functional tasks while they get the sensory input they need to focus, organize themselves, and function.

The sensory activities are presented as meaningful and motivating tasks that are based on the child’s interests, making them motivating and meaningful.

You can get the Sensory Lifestyle Handbook and start building a sensory diet that becomes an integrated part of each day’s daily tasks, like getting dressed, completing household chores, school work, community interaction, and more.

Get your copy of The Sensory Lifestyle Handbook here.

Colleen Beck, OTR/L is an occupational therapist with 20 years experience, graduating from the University of Pittsburgh in 2000. Colleen created The OT Toolbox to inspire therapists, teachers, and parents with easy and fun tools to help children thrive. As the creator, author, and owner of the website and its social media channels, Colleen strives to empower those serving kids of all levels and needs. Want to collaborate? Send an email to contact@theottoolbox.com.