Letter Reversals…they are a major cause for handwriting concern by most parent’s standards. Here we are covering information about writing letters backwards and what is normal for letter reversals in development. We also have some great tips for addressing common letter reversal struggles and even reversal activities that can help with visual perception handwriting struggles. Read on!

Also check out these activities to work on backwards letters.

Do letter reversals mean dyslexia? Not exactly! Dyslexia means problems learning to read, spell, and write. However, there is much more to reversals than what meets the eye, and should be assessed before jumping straight to the conclusion of dyslexia.

One creative tool to support the skills needed for this area of development is our new color by letter worksheet. Just print and go and work on letter identification and matching skills.

Reversals are age appropriate up until 7-8 years of age!

That’s right! Letter reversals are normal up to a certain age range. And when kids write letters backwards it is actually typical development in handwriting skills. Working on letter reversals in occupational therapy (and other visual perceptual areas) can be a common occurrence for school-based OTs…but just because kids are writing letters backwards, it doesn’t mean there is a true problem indicating a need for intervention.

It takes our brains that long to integrate all the skills needed to form a letter correctly and automatically during written expression. Skills needed range from phonetic awareness, ability to imitate pre-writing strokes, automation of letter formation, and higher level cognitive skills for multi-tasking.

Some kiddo’s develop these skills faster than others. Some kiddo’s struggle with these skills and may receive support services such as occupational therapy or pull out services with their school’s reading specialist before age 7.

Services provided before age 7 are typically preventative and because the child has shown struggles in the foundation skills needed for reading and writing, such as phonemic awareness, challenges with pre-writing strokes and shape formation (visual motor integration), poor fine motor skills, dominance concerns or underlying vision concerns.

What is a letter reversal

The term Letter reversals refers to several things related to reversing letters in reading or writing:

So, knowing that it is quite common developmentally, to reverse letters and numbers up until age 7 or 8, it can also help to know which letters are commonly reversed in writing.

These letters and numbers are often times transposed for one another:

It’s easy to see why the letters and numbers listed above are often reversed. They all contain similar pencil strokes. For children that are just learning to write, spatial integration can be still developing. Kids are getting the muscle memory in place can replace one letter or number for another.

These letters are often written backwards:

Each of these letters has a starting point at the top and pencil strokes that then go into a different direction. Children that are still developing handwriting skills are establishing the motor plan for direction changes with the pencil. The can sometimes “guess” the correct direction which results in letters being written backwards.

Numbers that are commonly written backwards include:

Each of these numbers also have a direction change which could easily be confused.

In many cases, working on letter and number formation so the muscle memory is established with fix reversal issues. Using multisensory formation activities helps to establish that motor plan.

The current theory among the educational community is that reversals start with phonemic awareness. If a child is lacking phonemic awareness, they may struggle with letter identification and spelling needed for fluent written expression. Similar struggles may also be seen with numbers, resulting in a negative impact on math skills.

In my clinical experience, I have found that children with high rates of ear infections and PE tubes (ear tubes) struggle with sound awareness. If the kiddo is unable to hear the sound of the letter clearly and consistently, it leads to poor sound awareness.

I have also found that children with difficulties with attention and auditory filtering often pair the wrong letter sound with wrong letter. This is important to note in sessions as it may require remediation by a speech therapist or reading specialist if available. Here is more information and activities for auditory processing.

While phonetics play a large role in reversals, many other foundational skills may influence whether a child will struggle with reversals or not.

Hand dominance is typically fully developed by five years of age. Right at the same time most children are learning and mastering the formation of letters and numbers. It also coincides with the start of kindergarten, or formal education where children who are struggling may be noticed for the first time. Writing with both hands can be a common struggle and an indicator of hand dominance challenges.

Children with handedness issues, whether it’s mixed dominance or delayed development of dominance, are more likely to struggle with left versus right tasks.

This plays into reversal concerns as many of these children cannot consistently discriminate left from right, leading to b’s and d’s, p’s and q’s being flipped. Often times, they are unable to recognize that they have made the mistake as their brain is registering the letter as they meant it to be.

Vision is can be one of the biggest challenges facing children who struggle with reversals. Chances are, they have had an underlying vision concern that goes unaddressed or unrecognized during the critical learning period of letters and their sounds.

(Children in the U.S. typically begin to learn letters and sounds between 3 and 4 years of age when they enter preschool programs. Curriculums now expect children to know their letters, sounds and how to write them upon entering kindergarten.)

Due to their vision deficit, the child may not consistently see the same image of the letter each time, or may not see the letter that is being taught due to “wandering” eyes or poor abilities to focus on the letter. The kiddo now has a poor foundation from which to build on, due to difficulties with recalling from their visual memory what the letter looks like, and pairing it with the correct sound.

To add to vision deficits, vision is not just what we see, or how the eye’s work together. It is also a motor task of taking information in with the eyes and reproducing an image, or in this case, letters on paper. This skill is known as visual motor integration and also plays a role in reversals.

Here are free visual perception worksheets that can address a variety of visual skills.

Visual motor integration allows us to write, draw and paint freely. To do all of these things, we go through a set development of producing pre-writing strokes and basic shapes in imitation to freely producing them from our memories and eventually becoming automatic. Here is more information and activities related to visual motor skills.

Most children learn to imitate these strokes and shapes at a young age from top to bottom and left to right. However, some children do not learn it this way or their brains are not “wired” to follow this pattern of development.

Children who deviate from this pattern may have difficulties with reversals as they struggle to learn and integrate letter stroke combinations in the correct order. When this happens, they struggle to write fluently and reversals may begin to appear.

Signs of poor visual motor integration skills that could lead to reversals include:

Executive functioning skills refer to our higher level thinking that includes attention, multi-tasking and memory, among many other skills. Writing requires all of these skills to be working at their best. If a child is struggling with any of these skills, they may demonstrate reversals and poor overall handwriting.

Reversals and poor handwriting may be the result of the child being unable to recall the strokes of the letter, the sequence of the strokes, what the letter looks like, where to start the letter, how big to make the letter, what each letter sound is, how to spell a word and complete their thought.

Oh, and lets add in that they have to remember how to hold their pencil correctly. For a kiddo who is struggling, this is a CHALLENGE.

There are so many more things that go into writing that may lead to reversals then what I have listed, but are too many to list out.

The main concept of executive functioning is that if the child cannot make it all work together, from fine motor to phonemic awareness to visual motor, they are more likely to struggle with reversals in their work.

It is important to recognize that reversals may be the sign of underlying deficits with foundational skills and should be addressed when they are noticed. The sooner that these underlying deficits are addressed the better off the kiddo will be. Once a child has had a long enough time period to practice incorrectly, it will be that much harder to break the “bad habits” and correct the reversals.

You will find many letter reversal interventions in this blog post.

2. Try “building” letters to establish the motor plan needed to create muscle memory. Use different colors to help children see the ways that the pencil moves when writing letters and numbers. This letter construction activity explains more about this process. This letter building strategy, paired with other forms of multi-sensory handwriting and teaching letters in groups based on the ways the pencil moves can make a big impact.

Addressing some of the other co-existing issues discussed in this article can be a start.

3. Address the motor planning in handwriting necessary for letter and number formation. Strategies that develop motor planning skills utilizing multi-sensory approaches can help with letter reversal. When kids learn and practice letters with visual, auditory, and kinesthetic sensory channels at the same time, the weaker channel may be reinforced (Berninger, 2000).

4. Work on visual perception with toys and games, and activities to address specific visual perceptual skills or visual motor skills.

6. Gain a better understanding of visual processing and all of the “pieces” of the vision puzzle that play into letter reversal and other concerns by joining thousands of other therapists, teachers, and professionals in the Visual Processing Lab.

7. Use this Vision Screening Tool to identify and address specific vision concerns such as letter reversals.

8. Try some of these activities to address visual motor integration and eye-hand coordination.

Have concerns? Talk to your child’s teacher or occupational therapist to address your concerns.

Contributor: Kaylee is a pediatric occupational therapist with a bachelors in Health Science from Syracuse University at Utica College, and a Masters in Occupational Therapy from Utica College. Kaylee has been working with children with special needs for 8 years, and practicing occupational therapy for 4 years, primarily in a private clinic, but has home health experience as well. Kaylee has a passion for working with the areas of feeding, visual development, and motor integration. 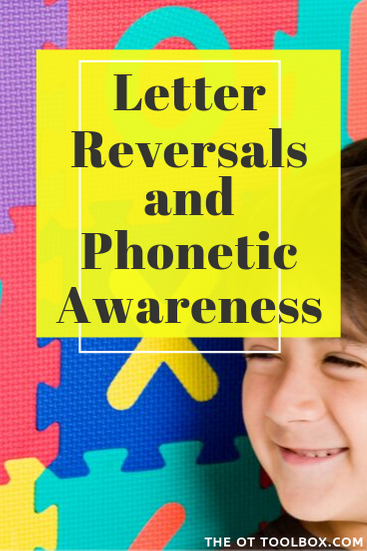 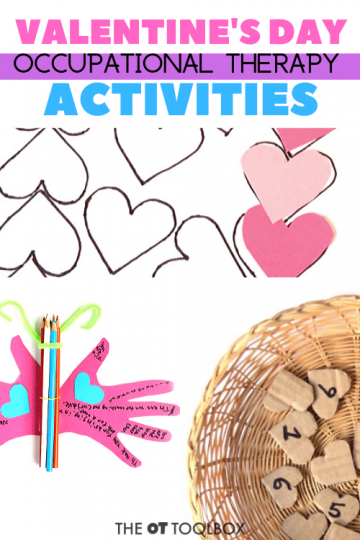 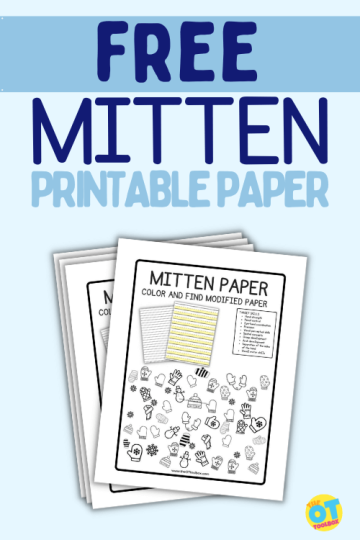 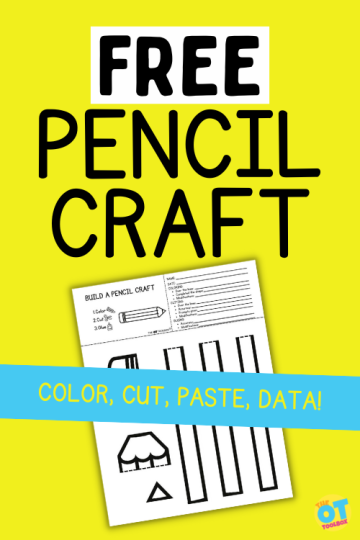 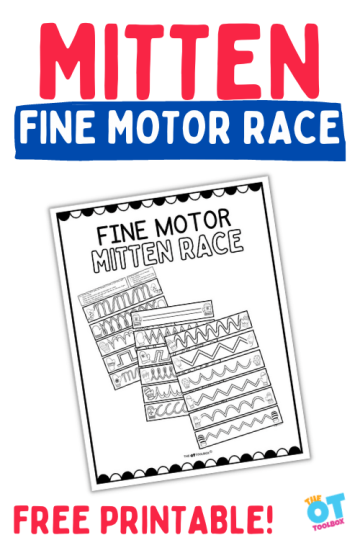