Subscribe to our newsletter - You don't want to miss out! SUBSCRIBE
If you’ve followed along with us here at The OT Toolbox, then you know that I love to pull my background as an occupational therapist into posts.  The crafts and activities that we do are more than just fun and cute.  There are important skills that a child develops through play.  Visual Motor Integration is a skill needed for many functional tasks like handwriting and pencil use, scissor use clothing management, and many more tasks.

How does Visual Motor Integration develop in kids?  We put together this list of  developmental milestones  for a general idea of development and so parents can tell when a problem might be present.

It is important to note that every child is different and every child develops differently.  These milestones are organized by developmental stages.  Be sure to contact your pediatrician for medical advice. If occupational therapy is needed to assist with delays in visual motor integration, an assessment from a licensed occupational therapist is necessary to determine individual needs and treatment. 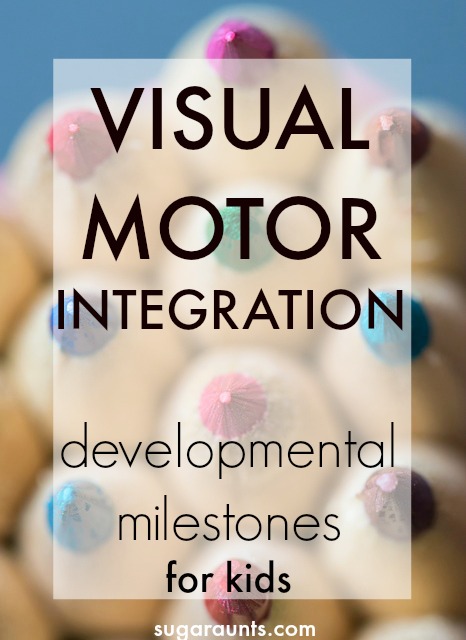 This post contains affiliate links.  You can read our full disclosure here.


What is visual motor integration?


Visual motor integration is often times presented a Hand eye coordination.  It is the ability to use your hands and eyes together in a coordinated manner.


However, visual motor integration has some difference: The visual perceptual skills that are necessary for the visual component of visual motor skills play a major part in perceiving and interpreting visual information. This level of visual processing is necessary for copying forms and identifying inconsistencies in written work. It plays a part in letter reversals and letter formation.

{These are general guidelines of development}


SIX MONTHS:
Brings hands together to grasp a block/toy while sitting supported on an adult’s lap
Extends arm to reach up for a toy while laying on back


TEN MONTHS:
Removes loose pegs from a Peg Board


TWELVE MONTHS:
Turns pages in a board book
Imitates stirring a spoon in a cup


THIRTEEN MONTHS:
Imitates tapping a spoon on a cup
Begins to places large puzzle pieces in a beginner puzzle

Imitates folding a piece of paper (bending the paper and making a crease, not alinging the edges)


FIFTY MONTHS:
Copies a square
Cuts a circle within 1/2 inch of the line
Build “steps” with blocks

Sign up for our newsletter to get all of our posts delivered to your inbox once a week.

Fine motor idea...grab a handful of dry pasta of a

Ohhh, it’s tricky to get the kids to do the hard

This is one of my favorite ways to learn (& play!)

Having a pre-planned set of occupational therapy a

Getting creative with supplies? How would you use