Want to make learning math fun and creative when the kids just want to “be done?”


Sometimes we need to practice and build math concepts just a bit more.  It can be hard to find ways to get the extra practice in when the kids really just are over practicing math (again and again!)


The baby wants held, the green beans are boiling over on the stove, and the other kids are dumping bins of puzzles all over the living room.  But, the second grader needs to practice regrouping triple digits just a bit more. 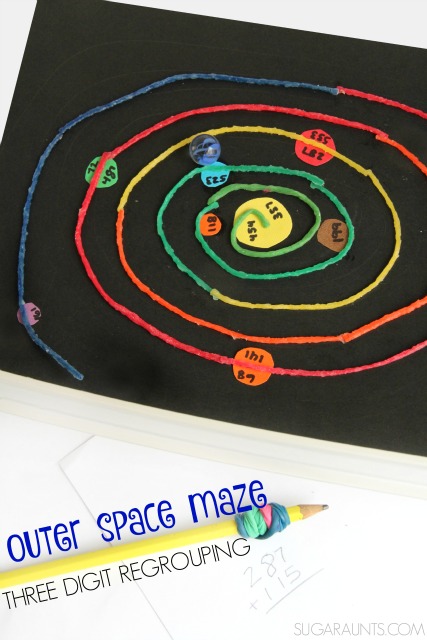 My four year old and I made up this 3D Outer Space maze to practice re-grouping tens and hundreds columns in three digit numbers one day while my second grader was at school.  When she came home from school, she was all over it!


Mazes are a great way to practice skills needed in handwriting and math.  They are a puzzle for hand-eye coordination and a visual motor workout.  Often times, kids have trouble aligning numbers in columns of ones, tens, and hundreds. A maze using hand-eye coordination like this one can help to work on that copying skill.


Materials you’ll need to make the Outer Space Maze:
(Affiliate links are included in this list and in this post.)
Black cardstock

Plastic bin (or any pan with an edge. A metal cake pan

Draw rings for planet’s orbits around the sun.  NOTE: We did this quickly and our outer space model is in NO way accurate in terms of size of planets or orbits.  Older kids could do this as a Science project. 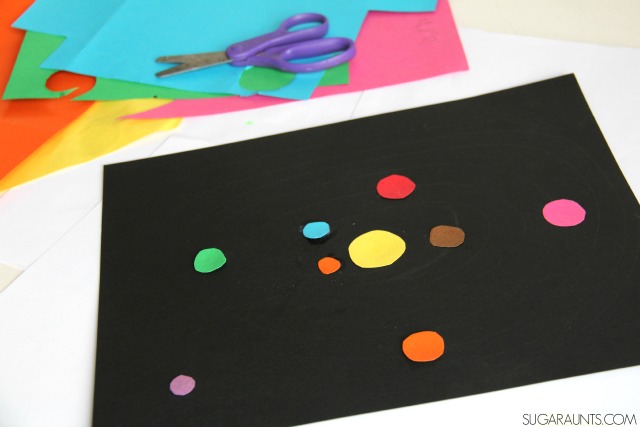 to represent planets.  Glue them onto the orbits. 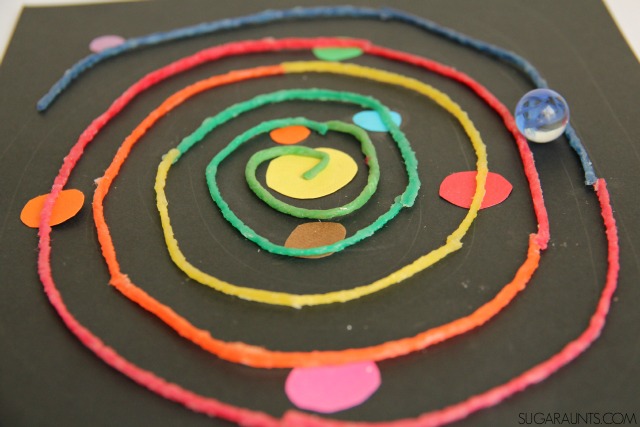 onto the orbits and over the planets.  Try to get them to stick right through the center of each planet.  Then, use the Black marker

to write three digit numbers on both sides of the planets.  Place the paper into a bin with edges and move a marble along the 3D track. 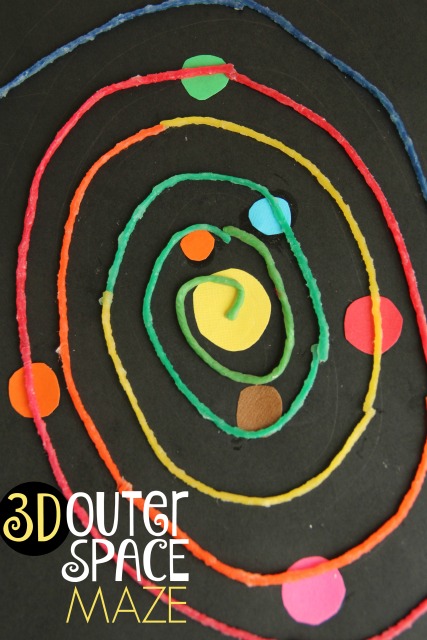 It takes coordinated and slow movements to get the marble to stay on the track and move along the path.  You can read more about Bilateral Coordination and how it’s needed in so many functional tasks HERE. 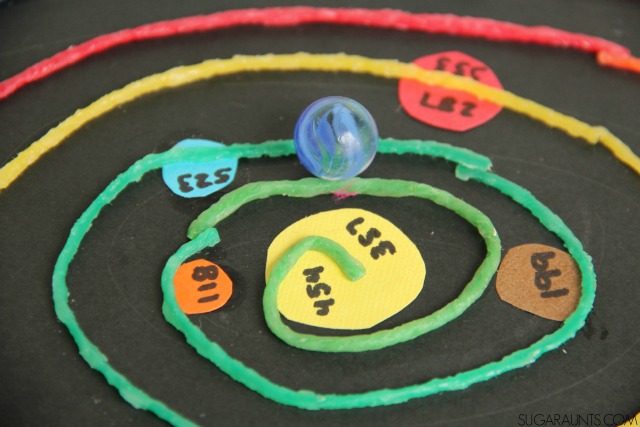 As your child moves the marble along the path, write down the numbers.  They can add the digits and work on adding with regrouping.  Start the marble at different spots and tilt the tray in different directions to get different numbers.

Adding the bilateral coordination movement to this learning task made it a fun and hands-on activity that a worksheet simply isn’t.

So, hopefully this idea will help your hands-on learner.  Have fun playing and learning math…until the beans boil over!


The second grade blogger team have created hands-on learning activities with an Outer Space theme.  See what they’ve been up to: 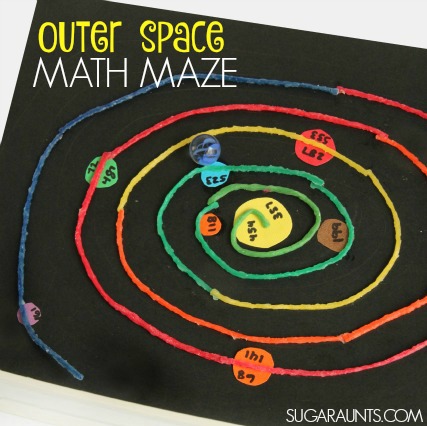 How to Add with Regrouping

Double Digit Addition with Re-Grouping Raccoon Craft
This Christmas Tree Fine Motor Activity is a Christmas themed busy bag that will hopefully help some of that hectic holiday craze that happens this time of year.  Give the kiddos this proprioception powerhouse punching activity and be assured that the kids will be learning, getting out a little holiday wiggles, and you, Mama, can cross off an item from that post-it note.
Or grab a cup of coffee and just relax for a second.  Both are equally important.
Check out these Christmas Fine Motor Activities for more creative ways to work on fine motor skills and address development of skills this Christmas season. 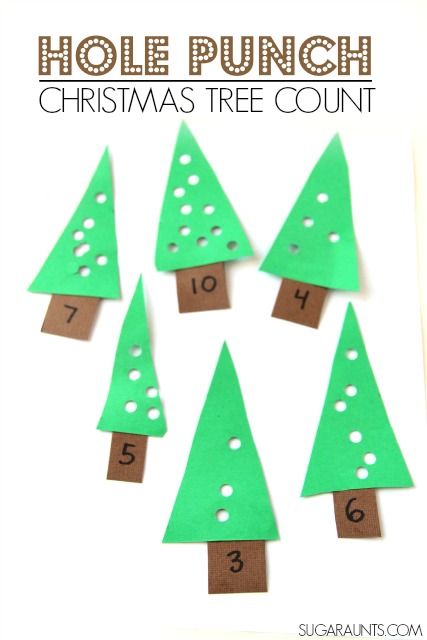 This activity is perfect for an Occupational Therapist‘s treatment bag in the days leading up to Christmas.  Kids get a little bit excited (right?) and the wiggles and giggles may end up leading to sensory overload.  A proprioception activity like punching holes is perfect to provide heavy work input to the hands and add calming input.
Using a hole punch provides a gross hand grasp strengthening work to the hands.  This activity is perfect for a Christmas themed warm-up activity before handwriting this season.
RELATED POST: CHRISTMAS JINGLE BELL SORT BUSY BAG 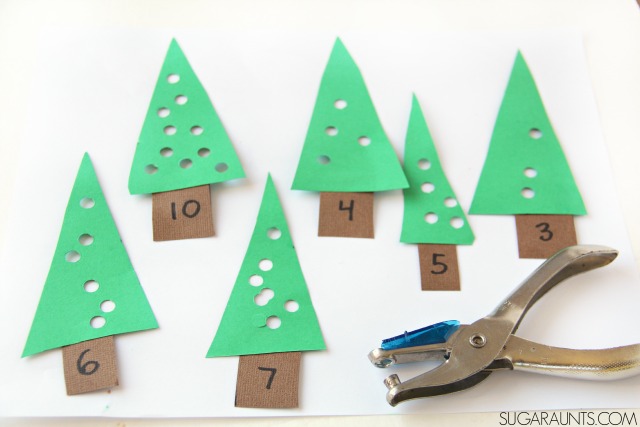 A busy bag is intended to keep little hands busy, while learning, exploring, and getting stronger through fine motor play!  And, what does a mom need on occasion for little ones, but busy activities for quiet time.


This Christmas Tree activity is easy to put together.  We used just a few items:
(Watch the blog soon for a scissor skills activity related to this Christmas tree activity!  Coming soon!)
Green Cardstock


To make the Christmas tree counting busy bag:
Cut the Green Cardstock into tree shapes.  Add trunks with the Brown Cardstock.  Glue these in place.  Use the black marker to write a number on each tree trunk.


That’s it!  Next, show your child how to name the number on the Christmas tree and then to punch the corresponding number of holes into the branches of the tree.


Enjoy this time as your kiddo counts, hole punches, and works on so many skills.  And rest assured that they will be doing a productive activity…and not adding more to that to-do list! 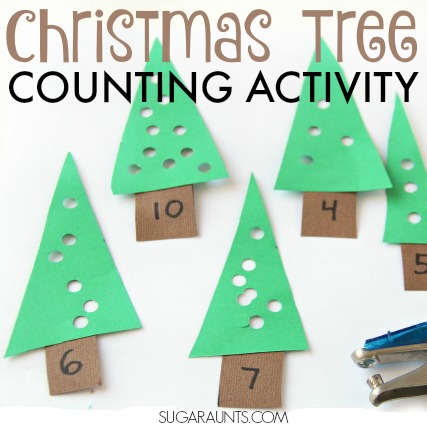 Looking for more Christmas busy bags?  Try some of these: 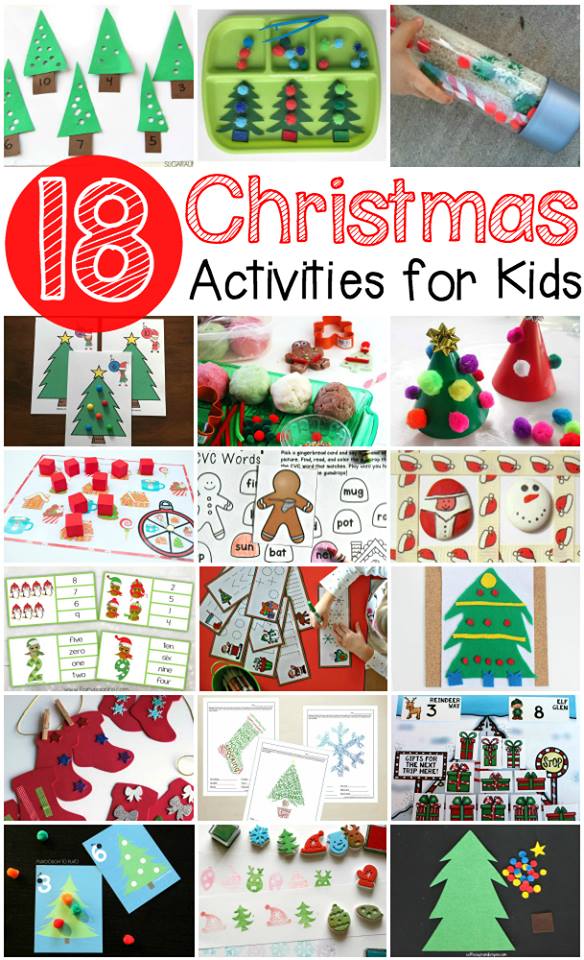