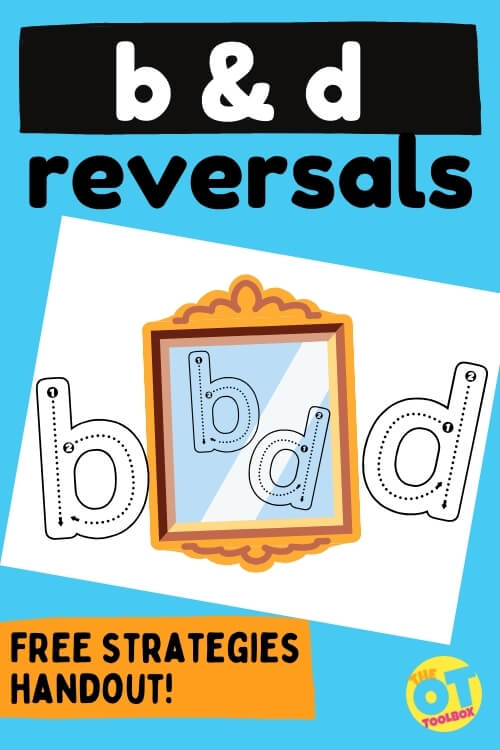 A common challenge for many children is letter b and d reversals. When kids first learn to write, is is very common for them to reverse letter b and d. Here, we are talking specific multisensory strategies to address reversal of these tricky letters.

b and d reversals

Letter b-d reversals are very common among children. We see these letters interchanged in reading, in writing, in isolation, and in words or sentences that contain both letters. But why are the letters b and d reversed so often?

Why are b and d reversals so common?

These two letters are the most commonly reversed letters, and it can even be a normal part of development.

It’s important to know that it is common for young children such as preschoolers and kindergartens to reverse some letters.  However, by age seven and at the latest age 8, children should be infrequently or not reversing letters at all. If they are doing it frequently and with little success despite remediation, you should consider testing to determine if there are other issues that need to be addressed first.

If b and d letter reversal is an issue for a student consistently above the age of 8, a visual processing problem, or dyspraxia, dysgraphia or dyslexia may be present, impacting letter confusion in written work or reading.

How to Correct b and d letter reversals

Children need to always be taught HOW to form letters, not given worksheets to trace and left to figure it out on their own as this just leads to them piecing letters together with no instruction in proper sequence or stroke direction.

This is a PROBLEM!

Lowercase b is formed from the top down with a vertical line. Then the round part of the letter is formed. Kids typically get that process.

But then, lowercase d is introduced. Sometimes, children also form letter d from the top, down, by starting at the top of the line. They make the vertical line down because that motor plan is established. Then, they need to add the curved portion of lower case d and they have confusion about which way to go. That’s when you see a letter reversal.

Part of the issue with common letter reversals like the b/d issue is that the motor plan for each letter isn’t established fully. This occurs in young children as they begin writing and learning correct letter formation.

Another issue is that letters are not formed correctly (starting letter d at the top rather than forming the “c” part of the letter first. You can get a better understanding of letter formation in our blog post on how to teach letters and the order of letter formation.

Children need to be TAUGHT from the beginning how to form each letter with the correct start point, sequence, and stroke directionality. Repeated errors in formation only further reinforce reversals and leads to more difficulty with repairing them down the road.  Don’t allow repeated formation errors, but do seek to work toward good habits in formation.

Multi-sensory strategies for b and d  Reversals

But if you need ideas to assist a child in repairing learned reversal behaviors, take a look at this varied list of ideas and pick what you think will work best for your children.

Choose a multi-sensory activity and work on letter recognition as well as formation using visual cues, verbal cues (auditory cues), and kinesthetic input to practice lower case b and lower case d in isolation as well as together.

Cognitive Cues to addressing b and d reversals

Use cognitive cues to help a child distinguish letters such as:

Struggling readers may revers b and d when reading. And, studies have shown that children who made more errors in the letter writing task went on to become poorer readers.

In this case, continue to work on the multisensory strategies listed above, but also use some of these tips during reading tasks:

How to correct b and d reversals

If a child is still reversing letters after the age of 8, or continues to reverse letters no matter the visuals or tricks that you’ve tried, try some of these strategies listed below to correct letter confusion:

Take your time to teach the formation of letters and numbers as well as using a multi-sensory approach when teaching the letters. It will always pay off in the end for the child!

Want a free PDF of multi-sensory letter reversal strategies? Enter your email address into the form below to access this printable handout. Use it in your handwriting toolbox to help kids write b & d!

Regina Parsons-Allen is a school-based certified occupational therapy assistant. She has a pediatrics practice area of emphasis from the NBCOT. She graduated from the OTA program at Caldwell Community College and Technical Institute in Hudson, North Carolina with an A.A.S degree in occupational therapy assistant. She has been practicing occupational therapy in the same school district for 20 years. She loves her children, husband, OT, working with children and teaching Sunday school. She is passionate about engaging, empowering, and enabling children to reach their maximum potential in ALL of their occupations as well assuring them that God loves them!