Skip to content
Four melty cheeses, garlic, and seasonings…
That’s a tasty side to lasagna! 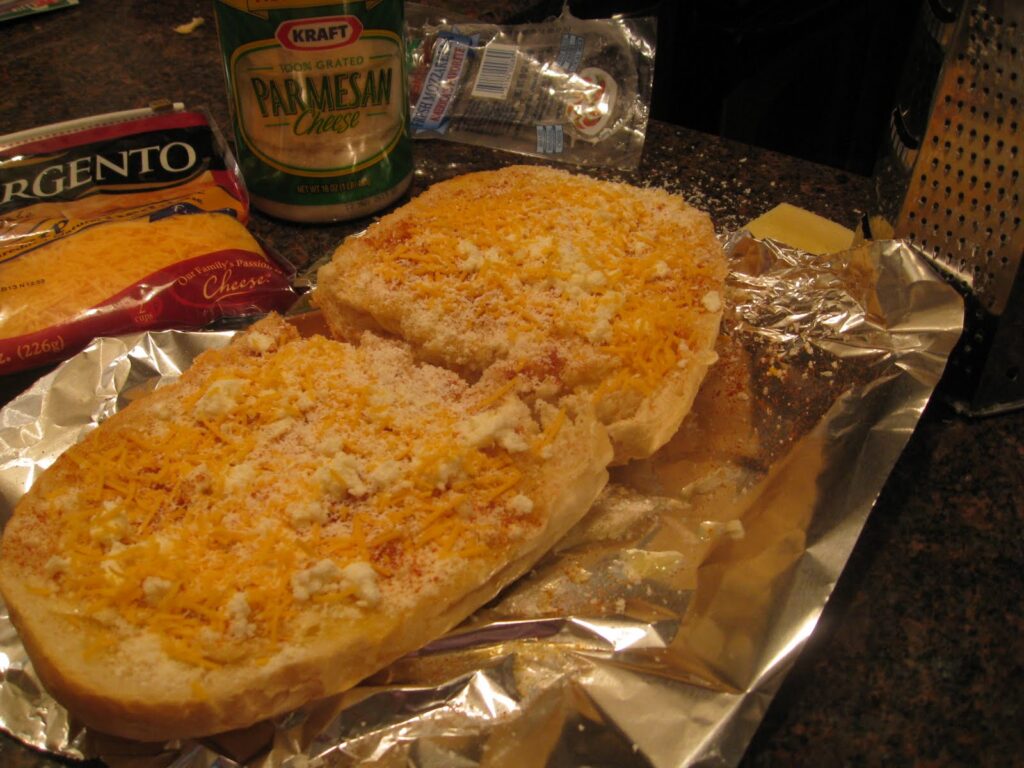 We made a big lasagna for dinner on Friday (and have been eating left-overs all weekend). I made my signature garlic bread. The hubby always asks me to make this to go with our lasagna nights. It’s so easy and the perfect crunchy, cheesy, buttery addition to pasta! I don’t measure when I make stuff like this so, eyeball the ingredients. Let’s just add this, though…can you have too much butter and cheese on a garlic bread??? hmmm…good question!
Enough talk…let’s get cooking.
Ingredients:
Fresh loaf Italian bread, sliced in half
stick of butter (or half a stick if you’re making just half a loaf of garlic bread)
3-4 cloves of garlic, minced
paprika
parsley
Grated soft mozzarella
shredded cheddar
grated Parmesan
grated Romano
Melt the butter in microwave…Pour evenly over both sides of the sliced bread. Spread minced garlic over butter. Sprinkle generously with paprika and parsley. Cover with cheeses. Wrap the whole thing up in foil and pop into the oven along side your main dish. Cook for about 15 minutes or so. Slice it up and try not to burn your mouth by tasting too soon! 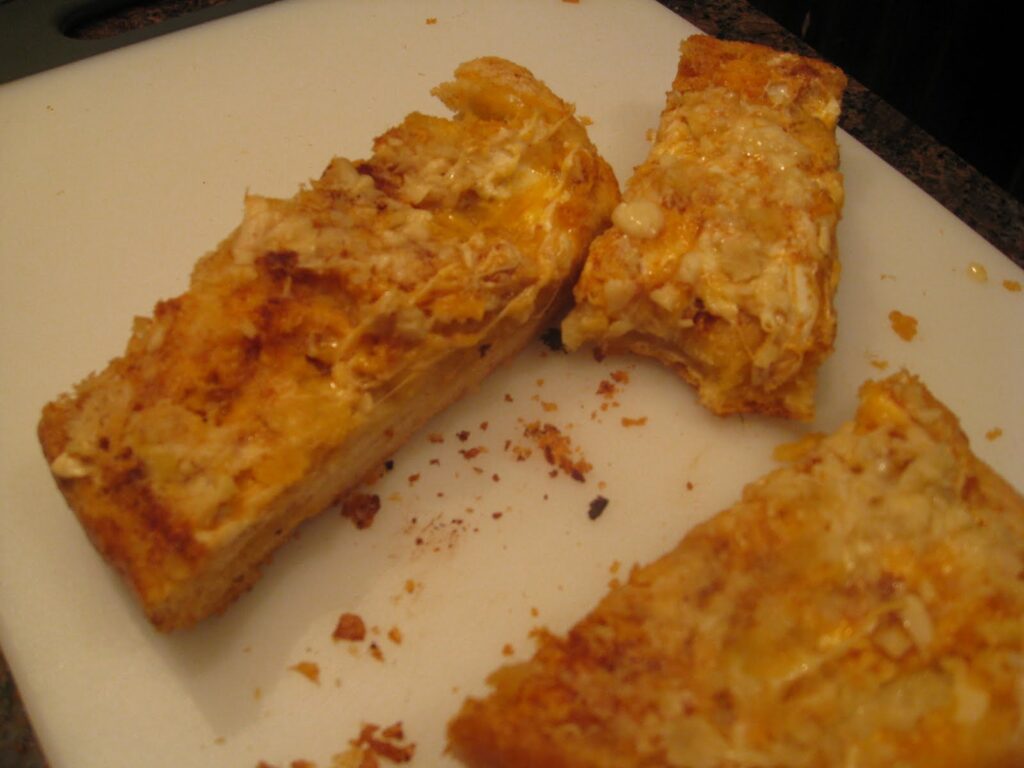 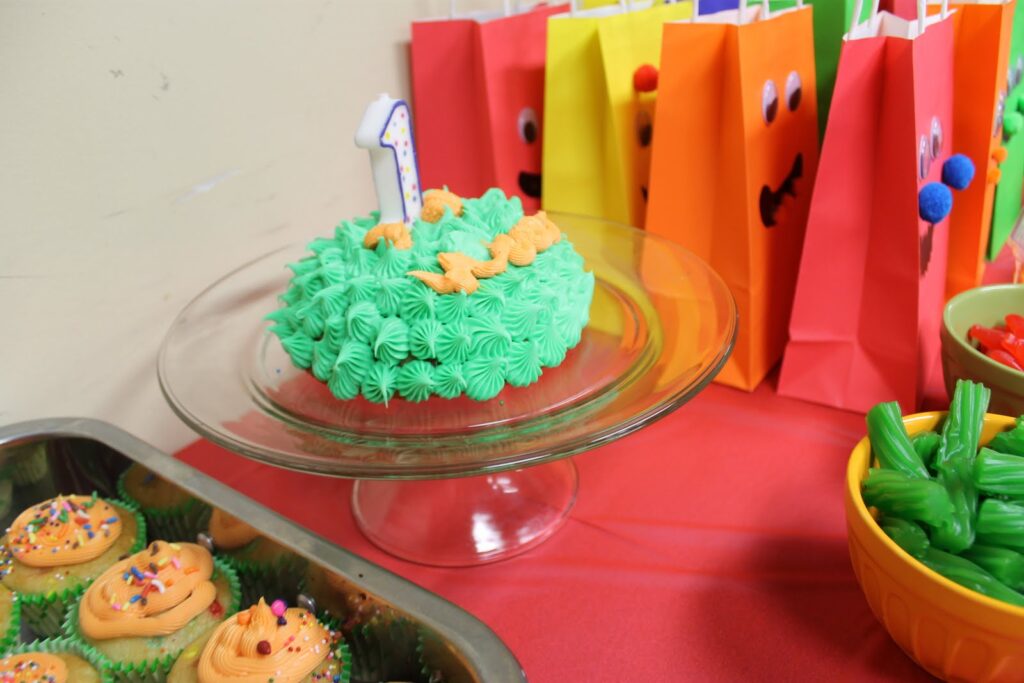 Cupcakes and Smash Cake– I got the cupcake idea . I used Funfeti white cake mix from a box (would love to have time to make it from scratch, but I just don’t), and chocolate cake mix.  I used my little mini cupcake maker for the cupcake on top.  Found the cute liners at Big Lots (one of my favorite stores!) and picked up the icing from Aldi in the clearance section- it was originally pink and yellow, I added a little food coloring to make the perfect monstery green.  The candy eyes were from Michael’s and the DumDums and peach rings from the dollar store.
The cake was just made in a round glass mixing bowl I had and I put dollops of icing all around and made a silly looking mouth.  I didn’t take much time doing this because we all know what is happening to this cake. 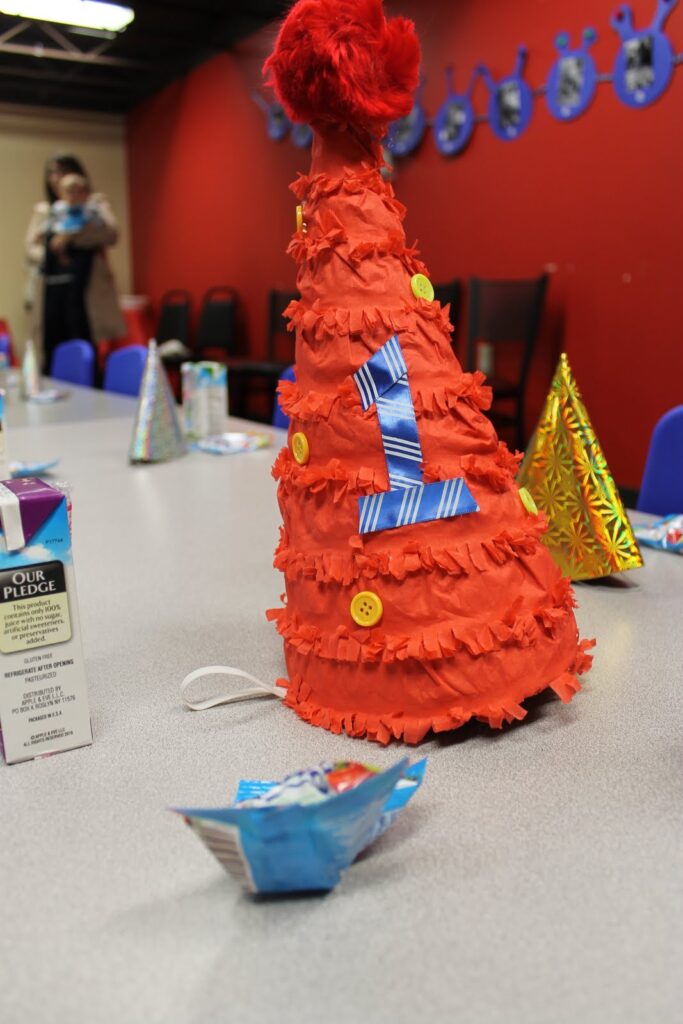 The Birthday Hat–  This I made out of stuff I already had laying around in my craft bin.  I cut out poster board and made it into a hat shape and glued it on the seam.  I then lined it with frayed tissue garland.  I glued this all around until it covered the poster board.  I then glued on buttons and cut out the same ribbon from the dollar store that I used to make the birthday banner.  Finally, I glued on a pompom on the top and some elastic on the bottom. 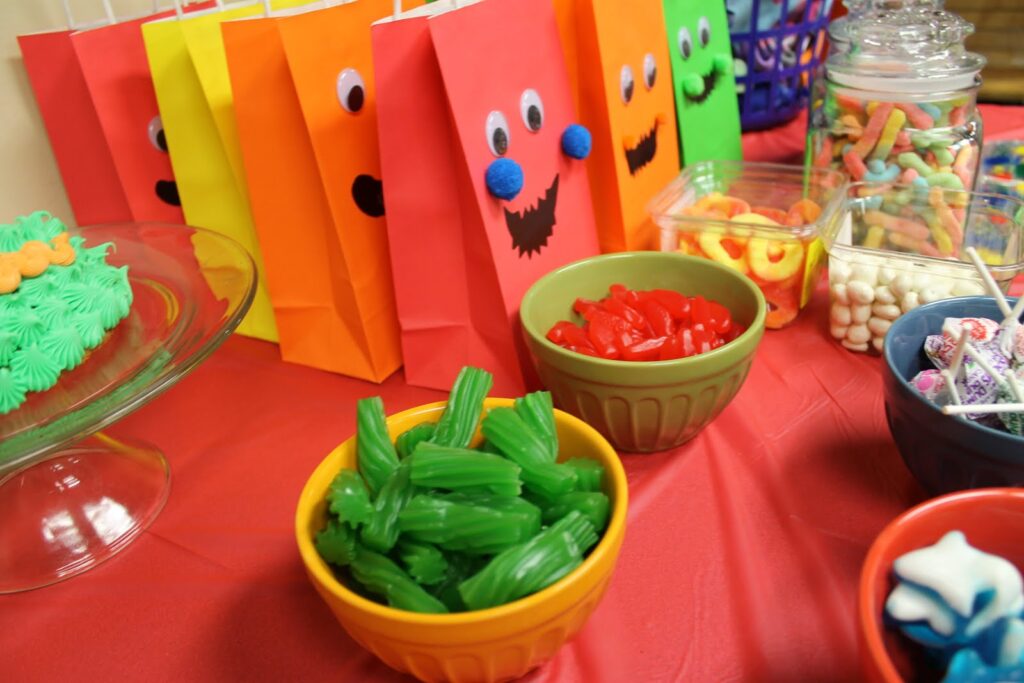 Snacks and treat bags– For the favors I made monster bags that the kids could fill with candy from a candy bar.  I got the bags at Michael’s in a pack of like 20 or something.  They were super cheap.  Then I glued on googly eyes that I already had and some fun pompoms to make them look silly.  I used a black sharpie to make a mouth. 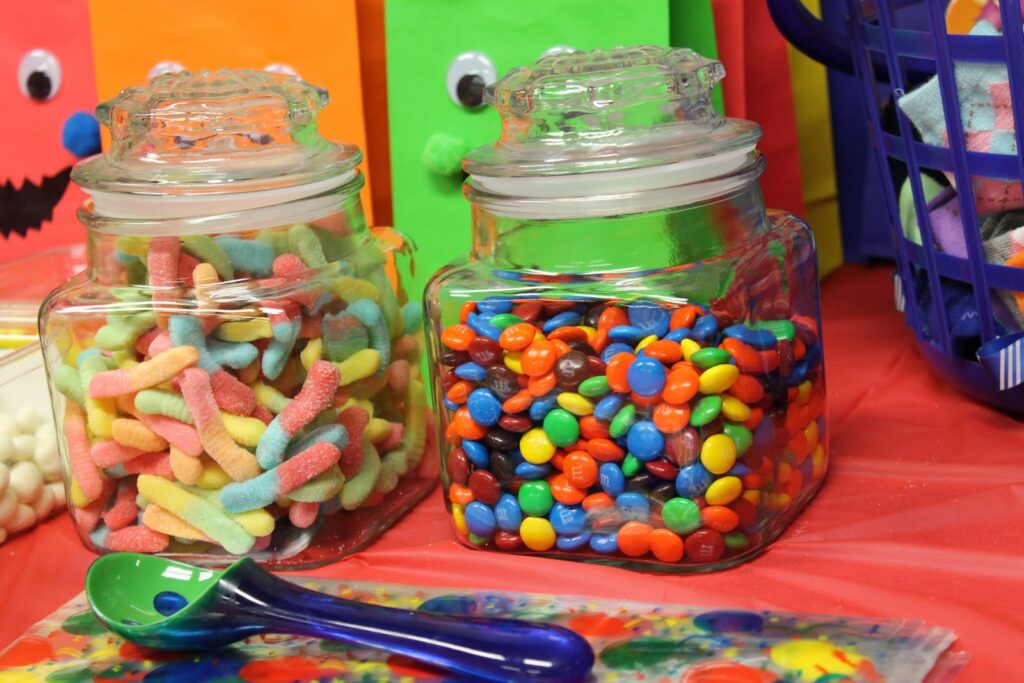 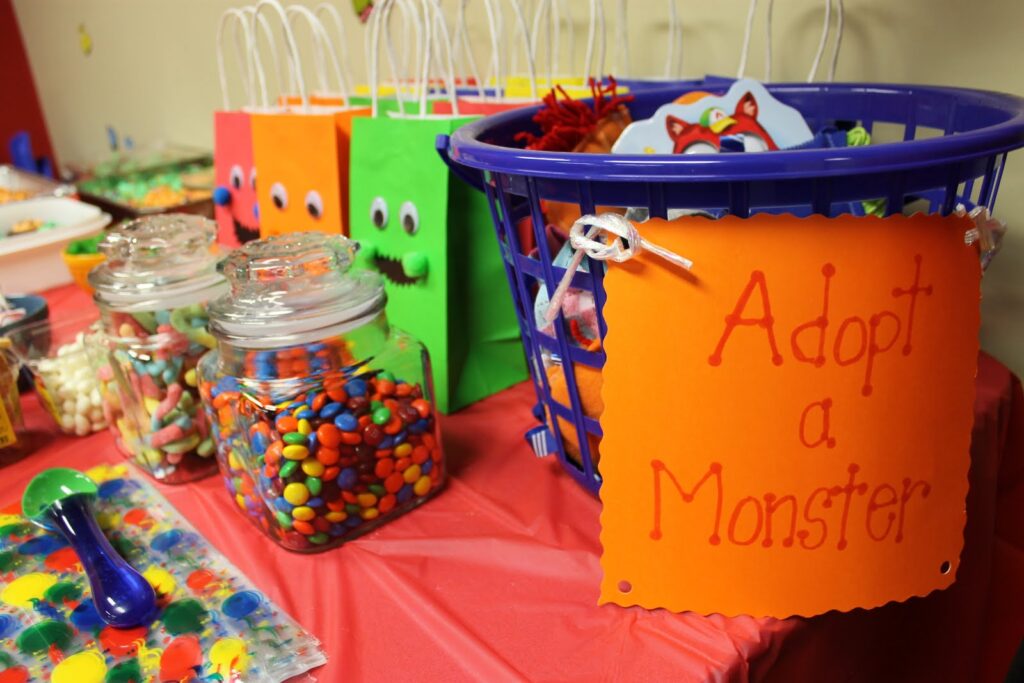 My favorite thing I did was make little monsters for all of the kids (thanks to the help of my sister Colleen).  We cut circles, squares and oblong shapes out of felt and fill them with crinkly papers (packaging from different things I bought that made crinkly noise when balled up).  We sewed them together with ribbon tag arms and legs and yarn hair.  I then used different color thread to make a mouth and sewed on button eyes.  They turned out so cute and I am so mad at myself that I didn’t take more pictures of them.  Each one was different and the kids had fun picking out their monster to take home.  I put them in a basket with a sign that read “Adopt a Monster”.
Overall, I thought the party was a huge success.  I had so much fun making everything and trying to spend as little money as possible without making it look like it! 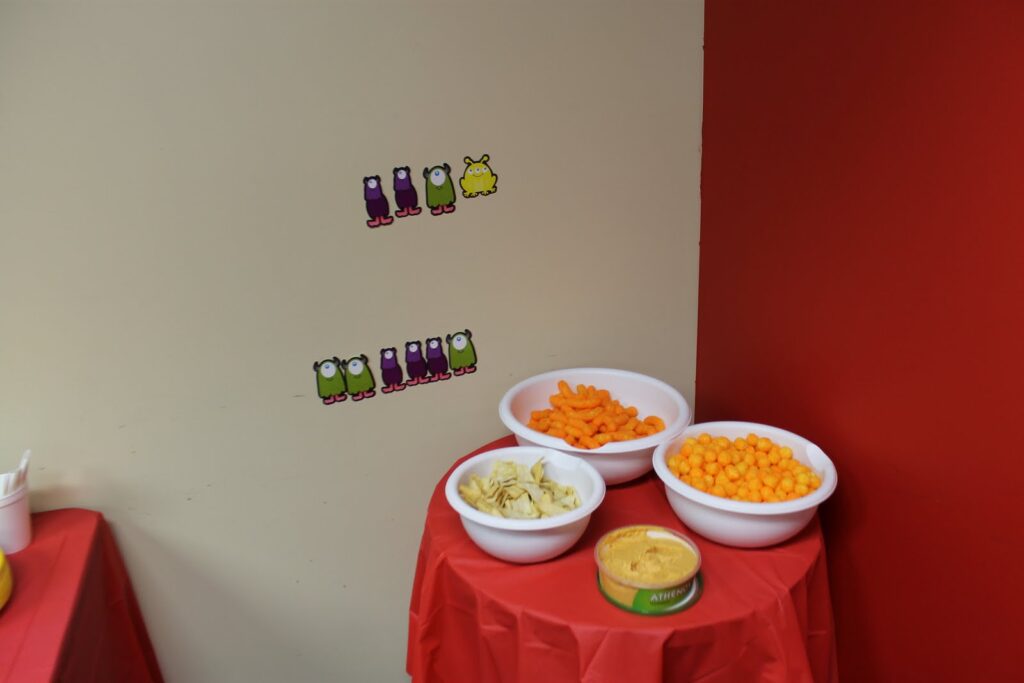 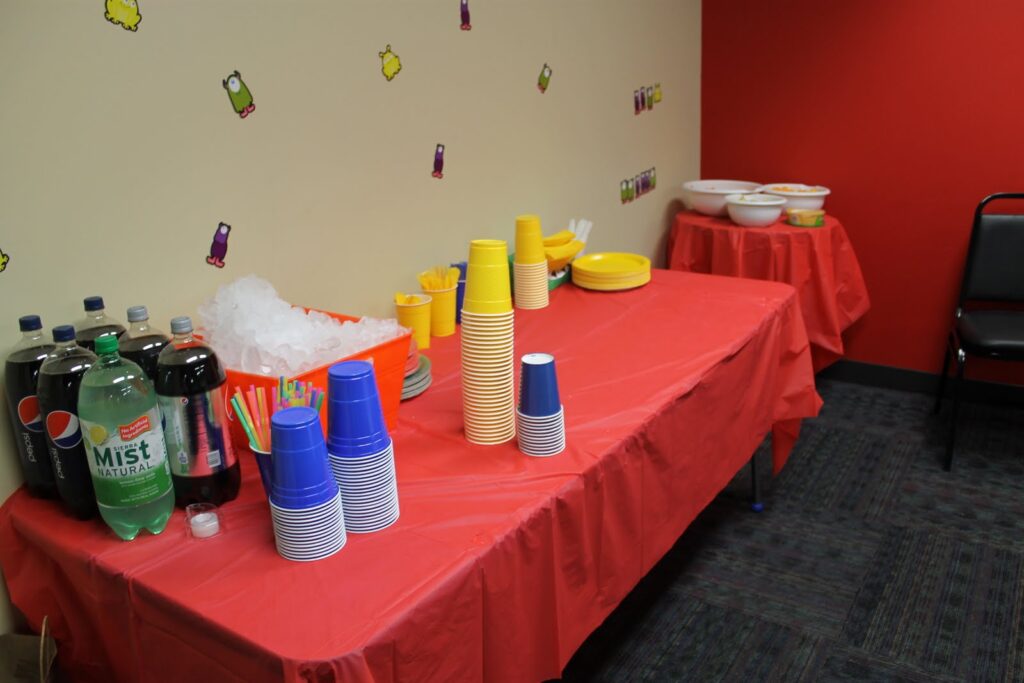 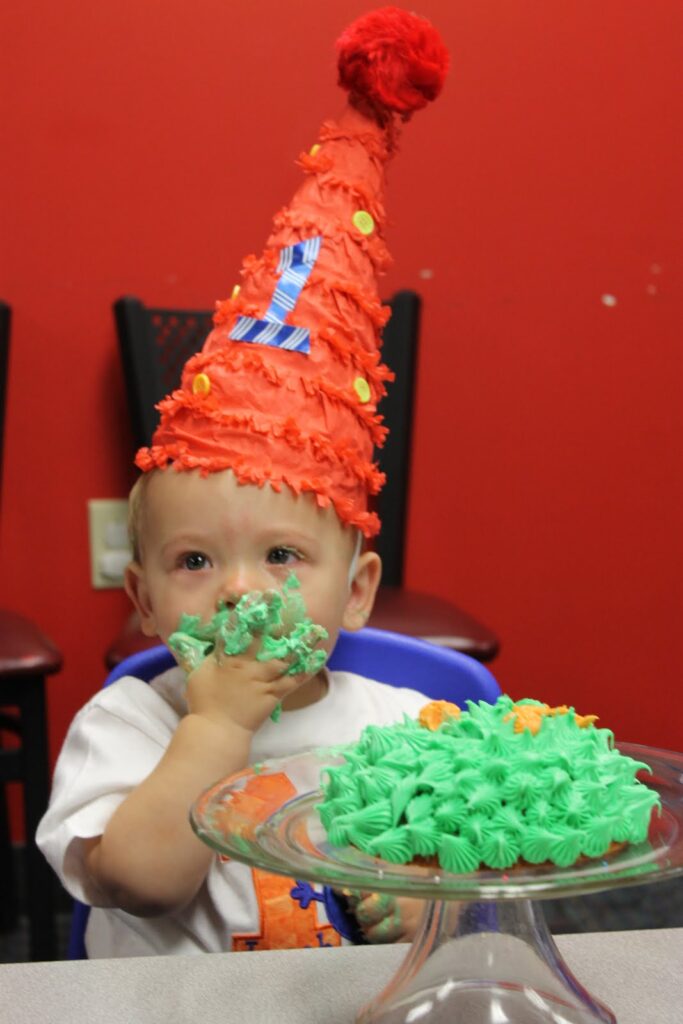 “The little monsters on the wall are waiting in line”- my 3 year old daughter, lol. 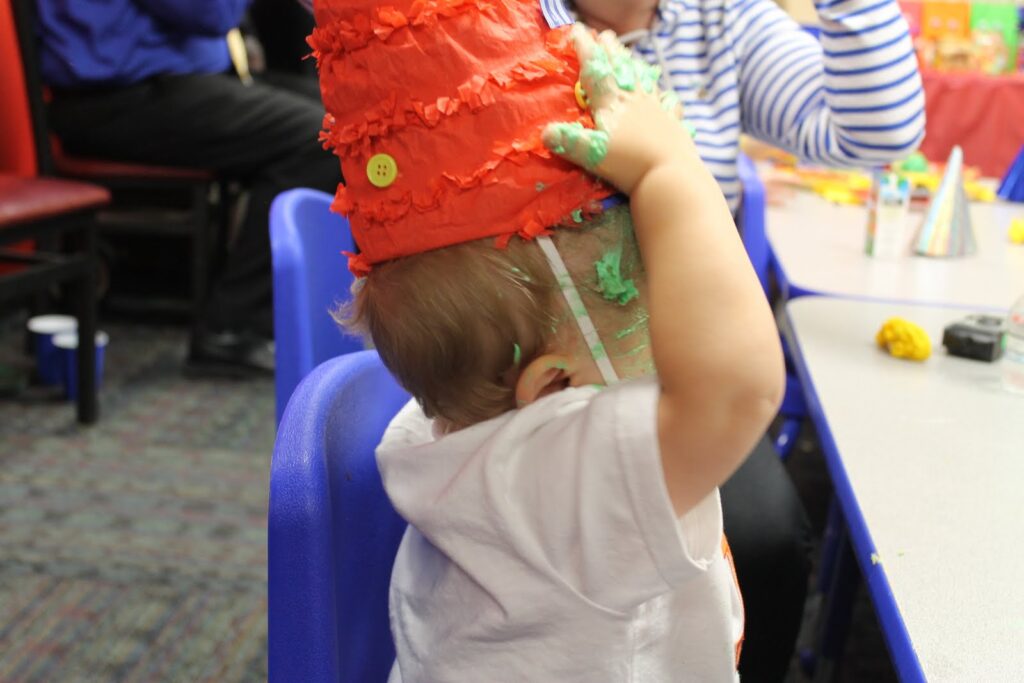 This is our first post as Sugar Aunts. We just want to share with the world what we are and what we do.  I am excited to be starting a blog with my sisters who are so creative and full of ideas.

As a middle child I am always looking up to my big sister.  She is what every mom wishes she could be and what every sister should be.  My little sister is kind and generous, always lending a helping hand and also a great mom.  Who wouldn’t want to hang out with these amazing women???

Together we are three SISTERS, MOMs of six children, and WIVES.  We want to show off our skills in the kitchen, backyard, crafting, and just being us.